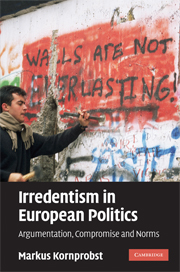 Territorial disputes and irredentist disputes are very prone to escalation and very difficult to resolve. Since the end of the Second World War, however, European states have tended to resolve their irredentist disputes peacefully. Markus Kornprobst argues that this pattern has arisen due to the emergence of a territorial status quo norm in the region. A study of all territorial claims made in Europe since 1848 and in the world since 1945 provides the background for detailed examinations of German and Irish irredentism, through which the author traces the development of the territorial status quo norm based on argumentation and compromise. Developing new theoretical and methodological tools to study norm selection, this book will be of interest to scholars and students of international relations, nationalism and European studies.